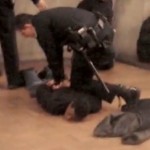 LOS ANGELES — Video footage showing the New Year’s Day 2009 shooting of unarmed BART passenger Oscar Grant by a former BART Police Officer that has never before been viewed outside of a courtroom was publicly released by the Los Angeles County Superior Court Thursday afternoon.

The videos were taken by BART passenger Tommy Cross and have been introduced into evidence in the murder trial of former BART Police Officer Johannes Mehserle. The videos have been enhanced by the Alameda County District Attorney’s Office.

The California Beat and The Campanil’s joint continuing coverage of the Johannes Mehserle BART Shooting trial is funded in part through Spot.Us. Visit our special trial news page and help fund this project.

Published in Mehserle Trial and News

Tashina is a contributing writer for The Campanil. She is a senior international relations and Latin American studies double major with a minor in journalism.