Mills will increase tuition for all students this fall and decrease financial aid for new students.

This year the college gained only half of its total tuition revenue because its “discount rate” is 49.4 percent, said Jamie Nickel,  Interim Vice President for Finance and Treasurer. The discount rate is the average amount of tuition the college pays per student in financial aid awards, meaning students, on average, received a financial aid package covering almost half of their tuition before additional fees and room and board are added in.

“Our discount rate is close to 50 percent, which is way above a lot of our peer groups,” Nickel said. Though the tuition rate is $36,428, the college only gets about half of that in revenue.

“We’re netting about $6,000 less per student than our private liberal arts peers,” Nickel said. “So $6,000 times the amount of [students enrolled full time] we have–that’s about $5 million a year that you could say we don’t have as a resource but our peers do. And these peers have the same faculty-to-student ratio that we do, so we all kind of have the same base operating costs. We’re just getting less money.” 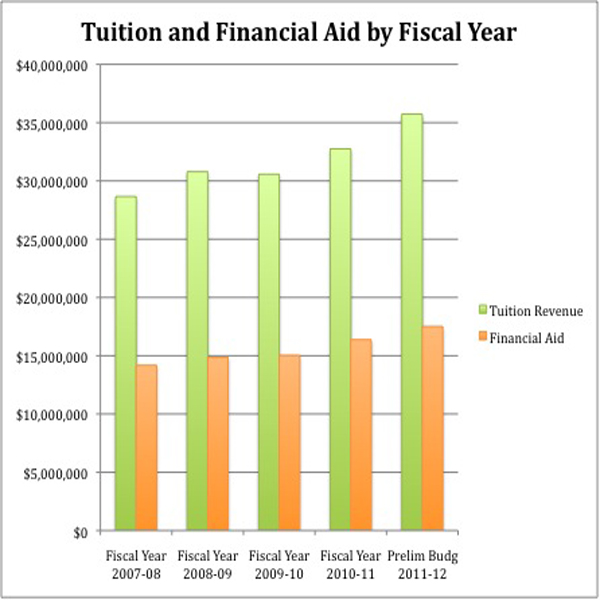 The projections for financial aid next year are only approximations, Gin said, because the financial aid office is still awarding incoming students for this fall.

Kirie Lange, Class of 2012 Historian, was concerned that some students would not be able to remain at Mills because their financial aid packages would not increase enough to make up for the tuition increase. She voiced this concern at the March 28 Associated Students of Mills College (ASMC) meeting, saying that by the time she graduates tuition will have gone up a total of 12 percent during her four years at Mills.

“The interesting thing is that the financial aid that you’ve awarded hasn’t increased to match that,” Lange said to Nickel and other students at the ASMC meeting. “So is there something that Mills is looking to do for students who are falling in between the tuition increase, to sort of help them stay?”

“That would defeat the purpose of increasing the tuition rate to try to cover our increasing costs. But retention is a priority for Mills,” Nickel said.

For Gin, the more financial aid available to students the better.

“Everyone in the financial aid office wants to give more money to students,” he said.

Mills does not have a sustainable business model at this point, according to Nickel, as it has consistently cut into its savings to fund college operations and has not had a balanced budget since 2009.

The budget was last balanced in 2009 because the college received about $8 million in unrestricted bequests, which are funds donors give Mills after their death. Because of the unpredictable nature of bequest gifts, the college cannot accurately predict how much it will get from deceased donors.

The decrease in the average financial aid package and school-wide budget cuts will only partially help with the college’s deficit spending, however. In order to balance the budget entirely, the college decided to raise undergraduate tuition by 4.5 percent. Nickel explained the tuition increase to students at the March 28 Associated Students of Mills College (ASMC) meeting.

“I want to assure you that the college does what we can to keep the percentage increase as low as possible, knowing that a lot of our students are on financial aid,” she said. “We’re not trying to gouge or anything. We’re just trying to keep a balanced budget.”

The tuition increases for Mills over the years have been substantially less compared to that of California public schools as well. The University of California system raised its tuition by 32 percent for the 2009-2010 school year and just approved an additional 8 percent increase for next year, Nickel said. And the California State University trustees just approved a 10 percent increase for its own schools next year.

Mills’ 4.5 percent tuition increase is also relatively low compared to increases in the past. Mills faced its highest tuition increase in the 2003-2004 fiscal year with a 12.1 percent increase. This sharp jump in tuition was because the college realized its prices were well below its main competitors in the area, Nickel said. In order to make itself look more competitive, Mills increased both its tuition and financial aid packages during the 2003-2004 fiscal year. Students did not bear much, if any, of the increase because of the simultaneous increase in financial aid, Gin said.

Though the increase is relatively normal for Mills and its competitors, it is slightly above the national average. According to the Consumer Price Index released in February of 2011 by the Bureau of Labor Statistics, the average national tuition increase was 4.1 percent, 0.4 percent less than Mills’ tuition increase.

The college has tried to keep costs down and balance the budget without raising tuition more than it has to, Nickel said. In the last two years, for example, faculty and staff salaries have remained the same, not accounting for increases in living costs. The college has also kept utility costs around the same for the last three years, and contracts are being renegotiated to decrease operating costs when possible, Nickel told students at the March 28 ASMC meeting.

Nickel invited students to give feedback: “Any questions? Barbs? Arrows?”

“What do you get out of it?” Nickel said, “A college that’s able to sustain itself long into the future if we figure out how to possibly balance the budget.”

ASMC Advisor Courtney Young-Law asked, “Would you say that there are actually tangible things that students would see different next year because of the increases? Or is it mostly to cover increased costs that the college is incurring from third-party vendors and staff–”

Examples of maintenance include paying off the Graduate School of Business building and making improvements to the music building, according to Nickel.
ASMC President Amelia Lopez asked if any of the revenue generated by the tuition increase will be applied toward taking care of other facilities students feel are
falling apart.

“If you guys have things that as a group you think really need attention,” Nickel said, “bring that forward to (Vice President for Operations Renée Jadushlever). If they know what the students want, they can make some of these things more of a priority.”

Diana served The Campanil as Chief News Editor (Spring 2012) and Assistant News Editor (Spring 2011 and Fall 2011). She graduated from Mills College at the end of Spring 2012 with a degree in English (Creative Writing emphasis) and a journalism minor. She will continue on at Mills as a fifth-year student in the 4+1 Teacher Prep program and earn her teaching credential and education master's degree by May 2013. You're welcome to interact with Diana on Twitter @DianaArbas.