The VMAs ’15 and all its shortcomings

This year’s MTV Video Music Awards were hosted at the Microsoft Theater in LA over the weekend, and I have so many words about all that was wrong with the show.

To start this off, this year’s awards show was hosted by actor and singer Miley Cyrus, who committed all types of cultural appropriation throughout her wardrobe. Come on, faux dreads?

Then, there was actor Rebel Wilson, who had the audacity to poke fun at police brutality, making light of the subject through “police strippers” and a bodysuit that read “F*** the Police Strippers.” Twitter users definitely expressed their disapproval and anger over her actions, and I can’t say that I blame them.

Finally, rapper Nicki Minaj called out Cyrus during her acceptance speech after Cyrus commented about Minaj’s tweets on racism in the music industry and the VMAs last week. Afterwards, Cyrus responded on stage with: “Hey, we’re all in this industry, we all do interviews and we all know how they manipulate s***. Nicki, congratulations.” Minaj could not even respond to Cyrus, due to producers cutting her mic off. Really? 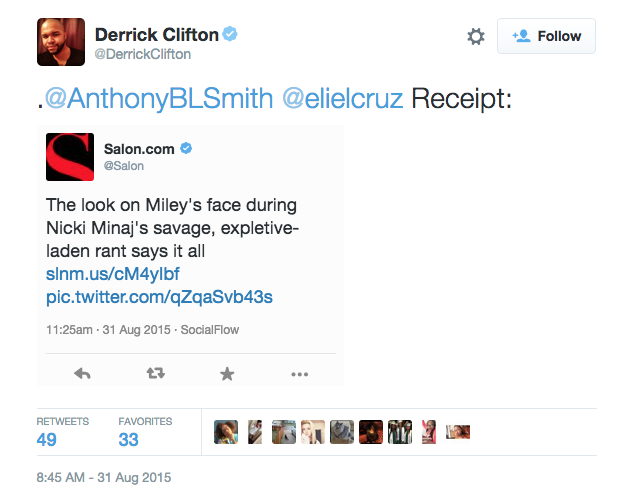 As I stated before, there were so many problematic issues throughout this show. As a woman of color, it frustrates me that so much cultural appropriation occurs in these award shows. It’s so frustrating that I’ve almost become numb to it, and that’s already saying something as it is. At the same time, the insensitivity towards police brutality in the ceremony made matters worse.

However, the biggest issue that I have with this is the downplaying of Minaj’s comments about race in the music industry in August and Cyrus’s response for being called out. Cyrus basically blamed Minaj’s anger in her tweets on being a sore loser, and got away with it. The media has also already made Minaj appear to be  a “vicious being” for her actions with headlines such as “Nicki Minaj Curses Out Miley Cyrus at MTV VMAs” and “Nicki Minaj calls Miley Cyrus ‘bitch’ on stage at MTV awards.” These headlines are almost reminiscent to the ones made for rapper Azealia Banks and her comments on Iggy Azalea last year; it’s ridiculous.

In Minaj’s defense, she had every right to call out a problem that has been occurring for years in the music industry, especially for the Black female body, music and recognition in entertainment. She also had every right to call out Cyrus on her comments, and that it meant more than just being “jealous” or a “sore loser” to Minaj. As a woman of color (particularly being a Black woman), it was refreshing to see an entertainer call out what I’d been thinking for years.

This year’s VMAs was another platform of ignorance and racism by allowing all of these matters to happen. It just shows how much needs to be fixed and changed in a public forum such as an awards ceremony, especially on acceptance, respect and sensitivity on such topics like these.

Dajanae Barrows is the Opinions Editor of The Campanil and has been on staff since Fall 2014. She is a 2nd year graduate student. Contact her at barrows@thecampanil.com.