UPDATE: Students, alumnae speak out at meeting in Student Union

Six Mills staff members were laid off yesterday, Nov. 30. According to student leaders, those let go were: Kate Dey (Director of Campus Career Services), Kala Hale (Events Coordinator from the Office of Institutional Advancement), Jess Miller (Director of Services for Students with Disabilities), Gina Rosabal (Director of Social Justice Initiatives) and two other names not yet known.

Within an hour of senior class president Jack Elliott’s posting of the news on Facebook, students met in the Solidarity Lounge to answer each other’s questions and begin organizing ways to show solidarity with the staff and disapproval of the layoffs.

Students responded to the layoffs with surprise and anger because of the College administration’s lack of transparency in the matter — students and other community members were not consulted in the downsizing process. Many students later said that the laid-off staff members were needed by the community’s most vulnerable population — students of color, low-income students and students with disabilities.

In a memo from Dr. Joi Lewis, Dean of Student Life, she assured members of the Mills community that the layoffs should not affect the quality of education students receive from Mills.

“Please know that maintaining a quality student experience for you as Mills students remains one of our highest priorities,” Lewis said in her Nov. 30 email. “Although there are staffing shifts, the College is committed to providing a seamless transition to students so you receive the services you need.”

Students are collecting testimonials online from Mills community members who were affected in some way by the laid-off staff members. Tables will be set up for video and written testimonials today, Dec. 1, at lunch by Adams Plaza.

There’s also a plan to attend and remain silent at a 4:30 meeting tomorrow — as a symbol of lack of student input in the decision making  that led to the layoffs — with Dean of Students Dr. Joi Lewis, who had offered the time for student questions and concerns about the layoffs. More plans can be followed at the “Students in Solidarity with Staff at Mills College” Facebook page.

An unedited audio recording of the student meeting can be found at the end of this post, below the photos. 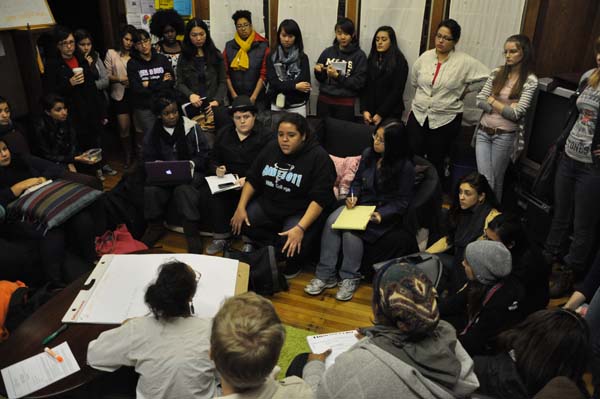 Seniors Jack Elliott and Kirie Lange agreed on Facebook to do something about the sudden staff layoffs. Within the hour, students packed the Solidarity Lounge to express their surprise and outrage at the news. Photos by Heather McDaniel and Jen Ramos.

From left to right: Seniors Kirie Lange, Jack Elliott (Class of 2012 President) and Modesta Tamayo (ASMC President) lead the meeting. Tamayo and other ASMC leaders had just come from a meeting with Dean of Students Dr. Joi Lewis, and Tamayo reported what she knew.

An easel-sized notepad was quickly brought into the center of the room, and a few students took turns writing down the group’s statement and ideas for action.

The meeting began at 5pm, but students continuously streamed into the room over the next hour and a half.

Diana served The Campanil as Chief News Editor (Spring 2012) and Assistant News Editor (Spring 2011 and Fall 2011). She graduated from Mills College at the end of Spring 2012 with a degree in English (Creative Writing emphasis) and a journalism minor. She will continue on at Mills as a fifth-year student in the 4+1 Teacher Prep program and earn her teaching credential and education master's degree by May 2013. You're welcome to interact with Diana on Twitter @DianaArbas.