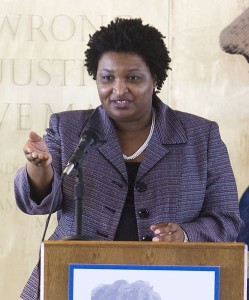 This election season has been rampant with voter suppression and manipulation, coinciding with the global rise of fascism.

Multiple reports from Texas claimed that voters who voted straight-ticket (meaning they choose a party’s entire slate of candidates with a single ballot mark) witnessed voting machines changing their vote to that of the opposite party, amidst a particularly tense election as Democrat Beto O’Rourke attempts to unseat Republican Ted Cruz.

Last month, the Supreme Court declined to overturn North Dakota’s voter ID law requiring residents to show identification with a current street address. The voter ID law threatens voter participation from Native Americans in the state, as many Native American reservations do not use physical street addresses. Furthermore, Native folks are overrepresented in the homeless population. Typically, Native voters use P.O. boxes for mailing addresses and rely on tribal identification which doesn’t list an address. Those identifications were previously accepted at polling places, and were accepted in this past primary election, but won’t be valid for the general election.

Georgia is also nearing the end of a historic gubernatorial race between Brian Kemp and Stacey Abrams, who could potentially be the state’s (and the nation’s) first Black female governor. Abrams has called Kemp, who has throughout the race continued to serve as Georgia’s top election official in his role as secretary of state, an “architect of voter suppression.” Georgia’s new “exact match” law states that a voter registration application is complete only if information on the form exactly matches records kept by the Department of Driver Services or the Social Security Administration. An Associated Press analysis reported that about 53,000 voter registration applications are still pending in Georgia—and the vast majority are from Black applicants.

What do we make of these constellations of white supremacist political violence? Many are reminded of the controversies of the 2016 presidential election and the subsequent lack of consequences and investigation into election fraud. During Donald Trump’s presidential campaign, he insisted that the election system was rigged and that he could fix it by “making America great again.” After he won the election, he no longer expressed this and went about his presidency making his corruption obvious by firing those who investigated him and demeaning the media once they became critical of him.

Yes, those who are able to vote must continue to do their research, make informed decisions and show up at the polls. But we must recognize that voting is not a blanket solution and that the terms in which voting is staged as an act of civic duty are framed by those in power who historically and continue to justify white colonial domination. We must critique white liberal narratives which assert that voting for progressive agendas is all that is needed to combat white supremacist violence, while also recognizing that voter apathy is dangerous and produces policies which threaten the survival of our communities. People who are able to vote need to show up at the polls, but longterm action is also needed to restructure voting beyond its current state as a mechanism which is only available to select populations.