Staff Editorial: the ethics of photojournalism 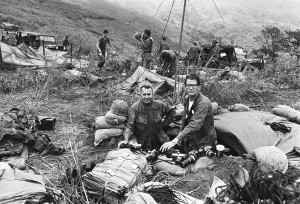 The ethics of photojournalism is a frequently contested issue, as we are applying older philosophies to the relatively new medium of photography.

While some photojournalism in publications such as National Geographic feels exploitative of subjects, other instances of photojournalism, such as the documentation of the Vietnam War, have helped to raise awareness and inspire activism.

In the event of a crisis, it is difficult to discern what is ethical and what is not, as the very nature of a crisis lacks control, and there is only chaos. In a crisis situation, such as a war zone, a natural disaster, or even something as unfortunately common as a driving accident, a photographer often feels that documenting the moment is all they realistically can do and that it is the way to best help the situation, according to photographer testimonials in articles by NPR.

Photojournalists are often criticized for not doing enough or “just taking pictures” in situations of crisis. But we often don’t know the reality of these situations and whether or not they could have acted safely in some other way. It isn’t fair to hold one person responsible for not doing enough in the face of a crisis, and documenting the atrocities in order to raise awareness around an issue could prove to be more helpful than anything the photographer could have done in that moment.

However, many tabloid publications use harrowing images of people in crisis as clickbait or a shock factor. In this case, the impact of the photograph is minimal, and does nothing for the people who were exploited in the process of getting the shot. It is unethical to appropriate images of people in war-torn areas, for example, for the benefit of the publication.

It is possible to document the scene of a crisis without exploiting an individual’s pain for an eye-catching photograph. Although photos of people, especially children, evoke an emotional response out of viewers, a broader photograph of a scene, for example an overhead shot of the area affected versus an up close portrait of a person, could have a similar impact without relying on using other’s pain and suffering.

There is an inherent power imbalance between photographer and subject; because of that, photojournalists need to be aware of their own positionality when entering a community that they are not part of. When photojournalists enter countries or communities they are not part of, it leaves a lot of room for exploitation and appropriation, especially considering that the photographers and publications are making money off of the photos while the subjects receive nothing.

While a greater education and an understanding of different cultures and global issues as a positive thing, photographers and publications should not be taking and publishing these photos for their own gains. Photojournalists and publications must be intentional with the photographs they take and publish, considering the impact their photo will have, who might be exploited, and who will benefit from the publication of the photo.