On Saturday, Jan. 23, Republican presidential candidate Donald Trump stated that he could shoot someone in public and not lose voters at a campaign stop in Sioux Center, Iowa. After Trump made the comment, many people on social media found it to be problematic. Although Trump has responded since then, stating that his comment was a joke in regards to his following as a candidate, The Campanil could not help but find his statement disturbing. 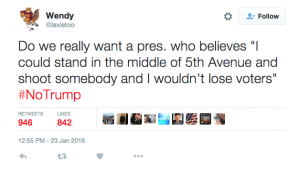 What else did we think about this issue?

We were not surprised by his statement. Since the announcement of his presidential campaign, Trump has made a following based on his controversial statements, from his standpoint on immigration to policing in the United States amidst the #BlackLivesMatter movement. With this particular comment, we found a relation to one of the biggest debate topics in the United States: gun violence. We felt that this joke was insensitive to that issue, especially in light of mass shootings that have taken place in the past year, i.e. the Planned Parenthood shootings in Colorado and the San Bernardino shooting. While The Campanil understands that Donald Trump, as well as many Republicans and members of the Republic National Committee (RNC) are supportive of the Second Amendment—the right to bear arms—it does not excuse Trump’s comment at the caucus.

The Campanil also could not help but notice that Trump’s comment also affects many communities, especially in light of the shootings of people of color by police in the United States. It also hints at a racial construct, exhibiting his privilege as a wealthy, white male. It would be one thing if his opponents, such as Ben Carson would have said such a comment, but it is another now that Trump stated this. Although Trump intended to appear relatable with his joke, it did not work for him at all. With all of these matters in mind, we continuously question whether he could really be President of the United States with his attitude. Even when claiming that his comment was a joke, he argued that the words were appropriate for a setting such as a caucus. With this comment, as well as Trump’s past statements, we believe that Donald Trump’s running in the presidential campaign proves problematic. Some of us have diverse backgrounds, with parents that emigrated to the United States, and his words and politics conflict with or attack that. At the same time, it frightens us that he could get away with a statement such as this one.

We recognize the wrongs, as well as the potential implications with Trump’s comment on Jan. 23. While we acknowledge his following of supporters, it still does not change or excuse this particular comment, or many of his other comments. We also know about his past with controversial statements, but we singled this one out because of the harm that such as a comment would make, especially because Trump wants to lead the United States for the next four years.

Published in Editorial and Opinions