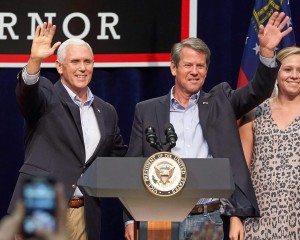 In early October, Republican candidate Brian Kemp was called on to resign from his position as secretary of state of Georgia by the Abrams for Governor campaign. A report from the Associated Press revealed that Kemp’s office was using a verification law to suppress many minority voters. As secretary of state, he is in charge of both elections and voter registration in Georgia.

An implemented “exact match” policy put a hold on more than 53,000 voters; more than 70 percent of whom were Black people. The policy put a hold on voter registrations that did not perfectly match government-issued identification. According to the census bureau’s 2017 report, Georgia’s population is only 32 percent Black. Many of these voters were people former minority leader of the Georgia House of Representatives Stacey Abrams registered during her campaign. Those voter registrations are jeopardized due to the “exact match” policy put forth by Kemp, who also happens to oversee the results of the state’s elections. This gives him an unfair advantage over his opponent.

California, a state known for its legislative reforms for the citizen’s right to vote, has had its own instances of voter suppression. Attorney General Xavier Becerra has been a supporter of voter reform but also defended a California policy that nullified several votes due to a handwriting analysis. For those who cannot make it to a voting poll booth, they vote by mail. Unknown to them, many votes were not counted if their signature on the envelope did not match the signature on the voter registration form. In 2016, up to 46,000 votes were thrown out because of a supposed mismatch of signatures.

Abrams, the Democratic candidate, would be the first Black woman to become governor in the United States. A heavy advocate of voter registration, she founded the New Georgia project which registered over 200,000 minority voters between 2014 and 2016. According to the New Georgia Project’s blog, Kemp’s office investigated them for voter fraud but did not find anything within the organization. Instead, he accused fault at the independent contractors who handled the registration forms saying that many of them were inadequate, incomplete, or forged. When the New Georgia project heightened voter registration in 2014 by roughly 85,00 applications, Kemp began to look into complaints of incomplete and forged forms and many voters were not verified until months after the next election.

“The Georgia Secretary of State’s office is charged with administering elections and investigating allegations of election and voter fraud. I am proud that Georgia’s elections are among the most secure in the nation, and we take every measure possible to ensure the integrity, security, and fairness of our elections process. Election and voter fraud undermines the very foundations of our great state and country, and will not be tolerated under any circumstances,” reads the “Stop Voter fraud” page on Georgia secretary of state website; signed by Kemp.

Kemp came into office as the secretary of state in 2010, implementing the “exact match” policy.  The policy was used from 2013 to 2016, until civil rights groups sued against the discriminatory practice. The lawsuit revealed that close to 35,000 minority voter applications had been canceled, an outstanding number. The case was settled in February 2017 where Kemp agreed to stop the policy, but months later was enacted again in April 2017. It had been revised to give people 26 months instead of 40 days to fix any discrepancies before having their registration canceled.

On Oct. 11, another lawsuit was filed against Kemp’s “exact match” policy by the Lawyer’s committee for civil rights and partners. They argued the strict standard of the policy and that its practice was unlawful and a “voter suppression scheme.”

The Republican candidate has been under fire before for voter discrimination when he began canceling Georgia voters from electoral rolls, defining them as inactive. According to the Brennan Center for Justice, he canceled over 1.5 million voters between the 2012 and 2016 elections. This was approved by the Supreme Court. Many people were unaware that their right to vote was compromised which may still hold true today for many eligible voters.

During the first televised debate between Abrams, Kemp, and Libertarian candidate Ted Metz, Kemp argued that he would not resign from his position if a recount were to happen. While both Abrams and Kemp were both put in a position of personal defense when questioned about finances, Kemp’s refusal to step down, even with a hypothetical recount, shows his control for power and pushing his own agenda.

“I took office to serve as Secretary of State and that’s exactly what I’m going to continue to do,” defended Kemp, “… I have staked my integrity of my whole career on the duty that I have as Secretary of State. I’ve always fulfilled and followed the laws of our state and I’ll continue to do that through the tenure of my service to this great state.”

A poll by the University of Georgia School of Public and International Affairs show a tight race between Kemp and Abrams putting him at 46.7 percent and her at 46.9 percent, a statistical tie. This three-point difference would fit the election results in a margin of error bracket, meaning that a recount could be requested. If the registrations that are currently on hold were allowed to vote in the midterm election, that could exceed the three-point difference declaring a winner. The verification law contributes to discrepancies such as missing hyphens, nicknames, and misspellings of names. Without given adequate notice of a hold, this causes voters to not be able to fix their registration and also causes fear of the inability to vote, a form of voter suppression.