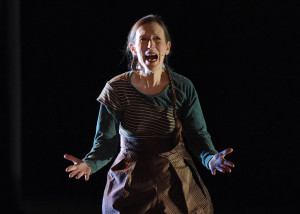 Renowned composer and singer Meredith Monk christened Lisser Hall’s remodeled space on Nov. 7 at her event “Archaeology of An Artist.”

The first event in Lisser’s redesigned Marilyn McArthur Holland Performance Theater, Monk lectured about her journey as a vocal artist and demonstrated selected works. In introducing her, the head of Mills’ music department, James Fei, announced that Mills is commissioning a new composition from Monk.

“We are incredibly thrilled to be part of her work process,” Fei said.

Other performers included in the lecture were vocalist Katie Geissinger, John Ivers on woodwinds and Na-Young Jung on the piano.

Monk started off by explaining how she originally became interested in music, then described her creative process and how she plays with form.

A fourth generation singer, Monk said her grandfather opened a music conservatory in New York while her mother became a professional singer in the radio industry and also sang commercials. Sometimes when she was a child, her mother had to take Monk into the recording studio, since at the time technology wasn’t able to record and replay commercial jingles her mother had to sing live.

“Music was a natural part of my growing up—as natural as breathing,” Monk said, adding that she used to sing herself to sleep as a child.

Born with strabismus, a condition where the eyes do not line up, Monk said that as a child she had a hard time with certain motions that required balance, so actions like skipping were hard. It wasn’t until she found Dalcroze Eurhythmics that her connection with music started to soar. Dalcroze Eurhythmics is a musical pedagogy that explores how to experience music through movement.

“Other children were learning music through their bodies, but I was learning my body through music,” Monk said.

She attended Sarah Lawrence for college, class of ‘64, where she became more involved in dance, theater and choir. Since then, Monk has gone on to receive many awards, notably a MacArthur “Genius” Award, an inaugural USA Prudential Fellow award and more. In 1978, Monk started her own company, called the Meredith Monk & Vocal Ensemble, which was nominated for a Grammy for their piece Impermanence in 2008.

One of the pivotal moments in her life was when she realized that the voice is an instrument, one that needs no words or lyrics as accompaniment. Much of Monk’s work has been categorized as experimental, consisting of vocal noises that explore and challenge how music is structured.

“I think of my work with two main branches. One is the voice and everything that goes along with it, and the other is visual art, interdisciplinary forms weaving together into luminosity,” Monk said. “I tend to work in layers and transparencies.”

Throughout her talk, Monk showed videos of or demonstrated several of her pieces: Click Song, Duets for the Solo Voice, clips from Quarry, Between Song, Songs of Ascension and more.

Music major Naomi Harrison-Clay, who uses they/them pronouns, said they appreciated many of Monk’s approaches toward music, her impact on the exploration of music and physicality and her presence onstage. However, they did notice something about Monk’s approach.

“Overall, I was definitely moved by both the lecture and the masterclass, and I’m excited to see what Meredith does with Lisser Hall during her time at Mills,” Harrison-Clay said. “Though I definitely have critiques of the ways in which Meredith appropriates a lot of her practice from cultures that are not her own, without giving them nearly as much credit as they deserve, I am still appreciative of the beauty of her work and her mindset about art and creation.”

Harrison-Clay had anticipated Monk’s visit to Mills for at least a year, since they first heard she would be coming to speak.

“I’ve always wanted to see her perform live—so much of her work is made for the purpose of being viewed in a live setting, and I knew it would take on a whole different meaning, to experience her live,” Harrison-Clay said in an email. “She dived right into explaining her life and her musical trajectory to us, and the ease with which she spoke made it feel like a one on one conversation with her.”

Monk went on to discuss how political art is a mirror of culture and how art can be healing, as a self-identified artist based in nonverbal and poetry work. She also was open about insecurities and the ups and downs of some of her creative processes. Harrison-Clay appreciated that acknowledgement of vulnerability.

“Open expression and admittance of vulnerability is something that is often missing in musical performances, especially from the cis white men who dominate the field of experimental music,” Harrison-Clay said. “While watching Meredith, I felt close to her and I trusted her, which is something so hard to achieve when speaking from atop a stage in front of 75+ strangers. I also really resonated with the way that she spoke about art-making as a mode of healing, as a tool for reconnecting with one’s own body, and for uplifting and affirming human life during difficult times. She spoke of art and music as an ‘antidote to the confusion and fear’ of our political climate, and reminded us that ‘you have to be brave to love.’”

Harrison-Clay also attended a masterclass which provided an opportunity to work with and learn musical and physical techniques with Monk. Although Harrison-Clay found the exercises to be basic vocal and movement practices, they found the experience to be very rewarding.

“It was still an experience that really moved me, because of Meredith’s presence and energy—she was completely non-judgmental and so encouraging. Sharing a space with her heightened my awareness of my own body and voice,” Harrison-Clay said.

According to Mills’ website, Mills announced in October 2017 that the college was awarded a $150,000 grant from the William and Flora Hewlett Foundation’s Hewlett 50 Arts Commissions. The 50 Arts Commissions is one of the largest commissioning organizations in the United States and was launched in January 2017.

According to an article by the Hewlett Foundation, “Instrumentalists and members of Monk’s acclaimed Vocal Ensemble will be dispersed throughout the theater, like the vertexes of Indra’s Net, while the audience moves independently around them. Each performer will be amplified individually, creating a web-like soundscape. The amplification designed in collaboration with Meyer Sound will ensure distinctive musical experiences for each audience member.”

Work on this commission is expected to conclude next year, and according to the event program will premiere here at Mills College in 2020.