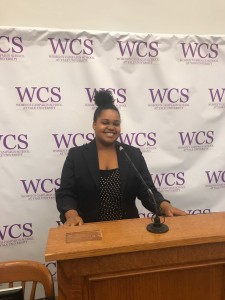 “I actually met her [Thao] at the Laurel Street Fair and I asked her if I could be on her team, and she said yes and I’ve been with her ever since,” Rice said.

Rice graduated from Mills in May of this year, with a bachelor degree in international relations and music and culture. At Mills, she was involved in the Associated Students of Mills College (ASMC), the Black Student Collective (BSC), and worked for the Office of the Provost and Dean of the Faculty and the Student Accounts department on campus. As the Fine Arts Chair, now called Arts & Technology Senator, for ASMC, she organized the first Mills Fall Festival for the Arts.

Dr. Chinyere Oparah, the provost and dean of the faculty, had a few words around Rice’s determination to affect change.

“While at Mills, Raven exhibited a strong commitment to community through the many student body positions she held. Having a positive impact is important to her,” Oparah wrote. “She likes to help people and show that someone values their voice.”

Over the summer, Rice interned in the district office for Congresswoman Barbara Lee, who is also an alum of Mills, and attended the Women’s Campaign School at Yale, which Rice says is the only nonissue nonpartisan campaign school targeted towards women in the nation. For five intense days she learned about fundraising, messaging, media targets, volunteer outreach, voter registration and more.

When her time at Lee’s office was coming to a close, Rice knew she wanted to get more involved in grassroots organization and so she turned to her local elections. She resides in the Dimond District and so she took a look at all the candidates and Thao’s stood out to her. It was not long after meeting Thao at the festival that Rice became Thao’s campaign manager.

As campaign manager, Rice organizes communication (emails, press releases); coordinates interns, volunteers and phone bankers; oversees some of the social media and website maintenance; prepares Thao for events, and has even acted as proxy for Thao before.

Kristina Duncan, a second year graduate student in the master’s of public policy (MPP) program at Mills, is one of Rice’s interns.

“My first impression of Raven was someone who is incredibly hard working, poised and down to earth,” Duncan said. “Over the past few weeks I’ve seen all these attributes and more; she is wonderfully compassionate and has a people-first mentality when approaching her work.”

Rice additionally walks and doorknocks with Thao, talking to constituents.

“It’s lead by example,” Rice said. “I need to be out there walking, I need to be doing all this stuff.”

Originally from a town in Southern California called Whittier, Rice came to Oakland to attend Mills. She said that she fell in love with Oakland and wanted to stay after graduating, but her father wanted her back home.

“He said, ‘the only way you can stay in Oakland is if you get an internship with Barbara Lee,’” Rice said. “[getting the internship] was the best news, I remember being so excited.”

Rice said that her move into politics wasn’t planned; it came from her drive to help people.

“I’ve liked every job that I’ve done because that’s what I’m really looking for—just to be able to help people,” Rice said. “I wanted to uplift the community in Oakland and learn more about where I am. I know a lot about the factors that got us here, but I just wanted to really help people know that their voice does matter, there are people listening.”

Marylola Diaz-Alvarez, Rice’s supervisor at Student Accounts, described Rice as “happy, joyful, caring, compassionate, dedicated, loyal.” She noticed Rice’s passion to make sure people get the resources they need, and feel and be heard.

That passion to make sure people are heard is something that comes up time and again for Rice.

“I think the thing that keeps me going is it’s always for the betterment of the people who live in Oakland, who live in the district,” Rice said. “I feel like being at Mills, there was a lot more that I could have done. I interacted with the greater community, but I feel like sometimes at Mills we are in this bubble.”

The ‘Mills bubble’ references how Mills has been compared to a gated community in the city of Oakland.

Part of being at Mills is wrapped up in student-driven discussions pushing awareness of the systems at play around us, learning to recognize the privileges that different people have experienced, and thinking critically about positionality.

“I think that being critical of the system is only the first step. Recognizing how institutions and systems have disenfranchised you, disenfranchised people like you, and really set it up, set the tone to where you are at a disadvantage. So once we have that knowledge, what do we do?” Rice said. “Do we continue to stay at that level where we are just critical or do we go out and change things, do we go out and try to change things?”

Although she has a lot on her plate, Rice maintains critical thinking, thoughtfully analyzing her role in Oakland’s community.

“By being here I’m already impacting this community. So it’s like ‘what can I do to make sure that I impact the community I’m in positively, so that I don’t displace people,” Rice said. “I want to do better by this community, and I have an opportunity to listen to people and I feel like this is your town.”

It is not easy, though. And it is not always recognized, either.

“In this line of work it is rare that you get a thank you. It’s so rare that you get a thank you and its not about the thanks, its not about the fuzzy feeling inside,” Rice said. “I think there’s something in me that…I think that’s how I was made. If I have something and someone else doesn’t have something it’s like, ‘oh, use mine.’ I also have to be cognizant of the different privileges that I do have, though they may be small, that I can leverage.”

Although Rice walks and doorknocks with Thao now, it wasn’t always so comfortable.

“I used to be really scared to door knock and talk to people, but then I realized that I’m connecting with my ‘greater neighbor,’” Rice said. “These issues connect people in different ways; you have an opinion on potholes, or you have an opinion on homelessness solutions, or affordable housing and deeply affordable housing, these are the issues that connect us and we all want what’s better for Oakland.”

Important issues for Rice that Thao is addressing include homelessness solutions, affordable housing and deeply affordable housing, fire prevention, potholes, education and choices for youth, union jobs and providing opportunities to build the Oakland workforce. Some of the solutions she suggested for the unhoused population single occupancy units at a hotel, social services, mental health services, case management, and job services. She knows each issue and Thao’s position and proposed solutions in detail right away, and it is clear how much she believes in Thao.

“My life revolves around the campaign right now,” Rice said. “Campaign life is nonstop. I’ve had a lot of help, and a lot of people who have had my back through this time. Oftentimes, you’re focused so much on the campaign that your personal relationships can just fall off, but I’m grateful to have people who understand and support me.”

Along with her other duties as campaign manager and balancing her social and professional lives, Rice solves problems and creates solutions.

“It’s a very interesting and amazing experience because I feel like I’ve grown so much. There are certain things where you can’t do anything but handle it. This happened—handle it,” Rice said. “You handle it. You just have to constantly be handling it.”

After the campaign Rice plans to wrap up communications, make sure there are no loose ends, maybe take some time to appreciate the whole experience, and sleep. Later, she plans to look for her next goal and enter the workforce. No matter what, though, she will go on to help people in the capacity she can.

“Whatever I do, I want to be serving the community. I think that’s where my happiness is, so whatever a job throws at me, I am doing this for a purpose,” Rice said. “I am doing this because in this capacity I can help someone or I can make it easier.”

She has learned a lot about herself in her time as Thao’s campaign manager, such as letting go of fear and embracing mistakes, as well as logistical experience with fundraising.

As for advice for students, she has a few words of wisdom.

When asked if she would ever run herself, Rice said that since she has been in a supporting role it would be a change.

“Maybe one day, but that’s a weak maybe. People keep asking me that,” Rice said. “Come back to me in a few years.”

Part of it has to do with a double standard in how women identified people in politics are viewed.

While Rice may not see herself in that kind of leadership position, Diaz-Alvarez certainly does.

“I think Raven is definitely a leader because she takes action on things she cares passionately about. She is a good communicator and strives to bring others along in her success,” Diaz-Alvarez said. “Raven is a joy to work with, not only because she is smart and a hard worker, but because she radiates positivity and joy.”

“A leader is more than someone who is willing to take charge. Raven embodies the definition of a leader because aside from stepping up to take on the job, she goes to great lengths to ensure that those who rely on her are taken care of,” Duncan said. “She handles a massive workload with grace, while remaining attentive to the needs of her team and providing appropriate guidance whenever needed.”

Adding onto that sentiment, Oparah concurred.

“Aside from formal positions she’s held, Raven steps in when she sees a need. She acts with integrity, honesty and humility—characteristics of a natural leader,” Oparah said in an email. “The sky’s the limit for Raven. Wherever her passion takes her, she will be serving her community. Who knows, maybe we’ll be calling on Mayor Rice someday?”

Regardless where she goes, it is Rice’s compassion and drive that people remember.

“I’m not sure what she will end up doing because she has many great talents and passions, but whatever she does, I’m sure she will give 100 percent of herself to succeed,” Diaz-Alvarez said. 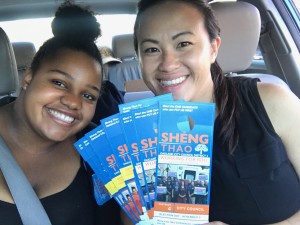