This sexist rap line is mouthed by Young Money rapper Tyga on the remix of Rapper Y.G.’s ” B*tches Ain’t Sh*t.” The song originated by rap legend Dr.Dre’s 1992 song with the same title.

In 2011, I am utterly appalled that California rappers think penning a re-make of Dre’s “B*tches Ain’t Sh*t” is appropriate for my generation.

I believe that Y.G., Nipsey Hussle and Tyga are going along with the GOP’s white male agenda for dismissing women as inferior. The song comes at a time when our government is making big cuts to Planned Parenthood, education and welfare.

I believe that male rap artists Y.G., Tyga and Nipsey Hussle may be attempting to gain some notoriety—trying to revive the old Los Angeles gangster music that has died. Hello, guys—this song will NOT sell.

Aside from even the content of the song and how non-lyrical it is, the beat is sloppy, wack, and ridiculously simple. The video concept was uninteresting, full of terrible angles, blank-faced women hanging all over the rappers, and really just tasteless. Where did they think this video would air? MTV? BET? The quality and lyrical content is not even close to television worthy.

The content itself is quite sad. The “thesis” of the song centers on the concept that women are inferior because they are promiscuous—yet, black male rappers can have sex  with anything that moves and not be the weaker sex (and by the way—AIDS is real, people!).

But hey, what more can we expect from self-proclaimed “ ratchet” rappers? In one of Nipsey Hussle’s verses, he proclaims himself as racthet, which according to Urban Dictionary.com is ” a nasty, trifling person, that usually only wants money or sex.”But, maybe rappers feel the need to dismiss women because they feel threatened by our success as of lately within hip hop.

Tyga, are you envious of your counterpart Nicki Minaj who is taking rap to monumental levels—breaking album records, about to tour the world with pop icon Britney Spears. Tyga, is your stylist a woman? Is she a b*tch that ain’t sh*t? Your mom? Sister?

As a black woman who blogs about music and fashion, I already experience sexism within the hip hop community. Earlier this year, I attended a Music Meeting event in which bloggers, radio personalities and DJs met up with the rap trio, The Rej3ctz. During the event, local rap artist Kafani got on the microphone to introduce his latest song and said, “This song is for all the b—t. ?” —but he caught himself. He apologized and gave the reason for not continuing his utterance because there were so few women at the event. Also, all of the women that were at the event (the whole 8 of us) were professionals—bartenders, photographers, bloggers, etc. This is the sad state of hip hop—male dominated and full of sexism.

Degrading women and trying to make them feel inferior does not prove masculinity. Women make hip hop, too. Take a look around to see what gender the managers, stylist, public relations, agents, television and radio hosts are. Male artists need women.

I hope that they realize it before we step on their heads with our 5-inch Christian Louboutin pumps. 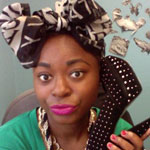 Tymeesa Rutledge is a third-year PLEA major and a hip-hop fashionista who fights sexism one lyric at a time.

Published in Column, Letters to the Editor and Opinions

Tymeesa is the Ad & PR Manager for The Campanil. She is a senior political, legal, and economic analysis (PLEA) major with a journalism minor. She runs a fashion blog called 'Tiny Tee's BIG small world'. Interact with her on Twitter @MiniPyTee.