Lets talk about sex: breaking the stigma around STIs

Sex is a topic that we’ve been socialized to feel uncomfortable talking about. But when it comes to sexual health, communication is crucial. It’s time to break the stigma and start talking about our sexually transmitted diseases (STI’s).

Contrary to popular belief, STIs are more common that one might think. According to the American Sexual Health Association (ASHA), one in two sexually active people will contract an STI by the age of 25. There’s no shame in telling a partner that you have an STI—chances are, they’ve probably had one at some point, or do have one, as well.

Communication between partners is crucial when avoiding STIs. Try to avoid using language that further stigmatizes STIs. Instead of asking if a person is clean, ask if they have any STIs and when they were last tested.

Although STIs are common, they are still stigmatized. People often associate STIs with someone being unhygienic or promiscuous. In reality, STIs have nothing to do with personal hygiene. While having more sex will put a person at a higher risk of catching an STI, you can greatly lower your chances by using protection correctly and consistently. As long as you’re having sex safely and consensually, there’s nothing wrong with having as much of it as you want.

Consistency is key when using protection against STIs, and using protection improperly can lead to STIs. Many people don’t think to use protection when performing oral sex, but Gonorrhea and oral herpes, two common STIs, can infect the throat and mouth as well as the genitals. Sex toys can also transmit STIs between partners.

Gonorrhea and chlamydia are two of the most common STIs, and the symptoms include painful urination and a discolored discharge. However, both of these STIs are often symptomless, and many people don’t realize they have them until getting tested.

Getting tested can be daunting and scary, but is crucial in maintaining sexual health. Planned Parenthood recommends getting tested after having unprotected sex, after discovering that a current or previous sexual partner has an STI, or if you are experiencing symptoms. Even if you have no symptoms and use protection during sex, it is still a good idea to get tested after each new sexual partner in addition to communicating openly. You can get tested at Planned Parenthood, urgent care centers and Vera Whole Health on-campus.

Discovering that you have an STI can also be a scary experience. Stigma around STIs makes it seem as if getting an STI is the end of the world, but the reality is that the most common STIs are extremely easy to treat. People with incurable STIs are also still able to have healthy and fulfilling sex lives.

Trichomoniasis is another common and curable STI that has symptoms of vaginal pain, irritation, inflammation and irregular discharge. People with penises often have no symptoms. Trichomoniasis is also cured by a single dose of antibiotics.

Pubic Lice is a parasite rather than a bacteria, and lives in the hair in the genital area. Shaving pubic hair will not get rid of a pubic lice infection. You do not need a prescription to treat pubic lice and can get the medication to treat it over the counter.

Syphilis is another common STI that is easily curable when caught in the early stages, so it is important to get tested regularly, even if you have been in a monogamous relationship for a long time. Symptoms of syphilis include sores on the outside of the genitals, rectum, and mouth. It is treated by the antibiotic penicillin.

While some STIs are incurable, they are treatable. Human Papilloma Virus (HPV) is the most common STI in the United States, and although it is sometimes known to cause cervical cancer, few strains of the virus are cancer causing. The symptoms of HPV are genital warts. While incurable, the symptoms are treatable, and many cases of HPV resolve on their own. However, it is still crucial to wear protection until getting the all-clear signal from your doctor, since you can still pass the virus on when you have no symptoms.

Herpes is a viral STI that comes in two forms: HSV1 and HSV2. HSV1 is associated with cold sores on the mouth, and HSV2 is associated with genital sores, but it is possible to get either virus in either area. While herpes is not curable, the symptoms are treatable. However, the virus can be transmitted even when no sores are present, so using protection is very important when one partner has herpes, as it is transmitted through skin-to-skin contact.

Human Immunodeficiency Virus (HIV) is a viral STI that is transmitted solely through bodily fluids. While HIV can lead to AIDS, early treatment will reduce the likelihood. While HIV is not curable, it is not a death sentence, and people with HIV can live long and healthy lives. When one partner has HIV, many steps can be taken to keep the other from getting it. HIV treatment for the positive partner is the most effective way in stopping the transmission. The partner without HIV can also take PrEP, a medication for people at risk of getting HIV that is greatly effective at lowering their chances. Condoms will also reduce the risk of transmitting HIV.

While it can feel embarrassing to be diagnosed with an STI due to the stigma surrounding the issue, many are curable if not easy to live with. It is important to tell to your sexual partner or partners if you tested positive for an STI to ensure that it is not spread. The Planned Parenthood website  has advice on how to talk to your partner about STIs if you don’t know where to start.

The Community Health and Resource Center (CHRC), located in Cowell, has a diverse selection of free protection methods so you can continue to enjoy sex without the stress of STIs. 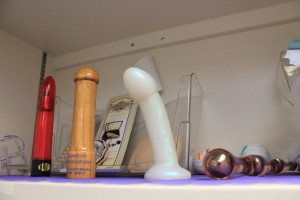 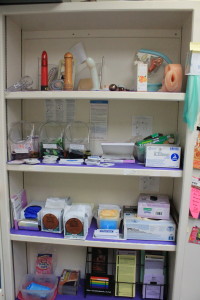 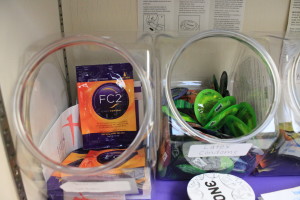