20 years ago, Kristen Caven’s book of cartoons was banned from the Mills College campus bookstore. In it the Mills alumna drew former president Mary Metz, parodying her hair’s ever-expanding size and depicted Warren Hellman, former chairman of the Board of Trustees, sitting in a meeting and musing on possible reactions to his upcoming announcement that Mills will be going coed.

Today, posters with her name splashed across them are up around campus, urging passersby to buy her new book.

Her book Perfectly Revolting: My Glamorous Cartooning Career is a look inside her life as a cartoonist. It includes the 20th anniversary edition of “Inside the Mills Revolution, a cartoon history,” an updated version of a cartoon that was banned in 1990.

Caven, a student from the class of 1988, was a cartoonist for The Weekly while she was enrolled at the College. She became the Strike’s official cartoonist of sorts, illustrating what she saw around her — the pickets, the blockades, the meetings, all the way down to the announcement of the reversed coed decision.

The updated edition includes an introduction from Caven explaining how she found out about the Strike: Once she got back on campus, the whole demonstration was so well-organized “there was nothing for me to do but wander around and draw what I saw.”

At her pre-launch tea party in the Alumnae House March 14, Caven reminisced about the famous media attention around the Board’s decision to go coed. Many media outlets reported women crying over the decision.

“They cried. Do you remember those headlines?” she said.

That day in the Alumnae House, Caven took visitors through the process of making her new book, which she dedicated to “girls who snort when they laugh (and cry when they’re upset).” She joked that choosing which cartoons to use, writing commentary and completing the book kept her quite busy.

“I sacrificed many hours of prime story and cuddle time,” she said, smiling at her 13-year-old son Donald, who sat on a couch next to the podium.

Depicting the Strike and working as a cartoonist for The Weekly during her time at Mills was an incredibly important part of Caven’s artistic and personal journey. She said her new book wouldn’t exist without her experiences at Mills and the cartoons she drew during the Strike.

At an event celebrating the 20th anniversary of the Strike on May 4, Caven spoke about how she was inspired by the work done by the strikers.

“I was so amazed and so proud of what I saw,” she said. “I finally decided to do something about it and share it with you.”

Caven’s original group of cartoons depicting the Strike were supposed to go on sale in the campus bookstore in June 1990, a month or so after the Strike ended. Before the book went on sale, she got a call from “someone in Public Relations, who told me, ‘You can’t sell that book on campus!”

Although Caven admits it did feel like a setback at the time, she has clearly come full circle. She joked about placing an “UNBANNED” sticker on her books, which are being sold in the bookstore now.

“Sometimes it takes 20 years to get to the place when it feels just right,” she said.

Here are some of the comics Kristen Caven has published for The Weekly during the Strike: 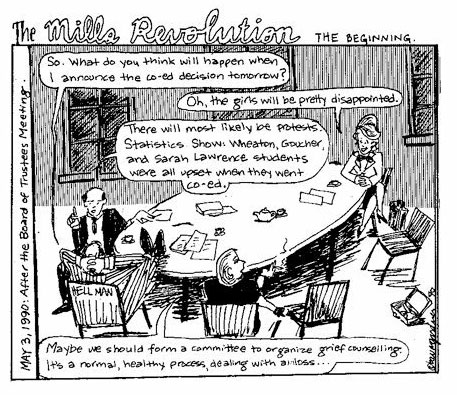 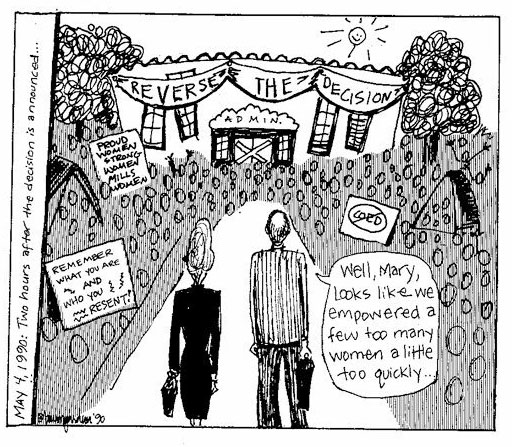 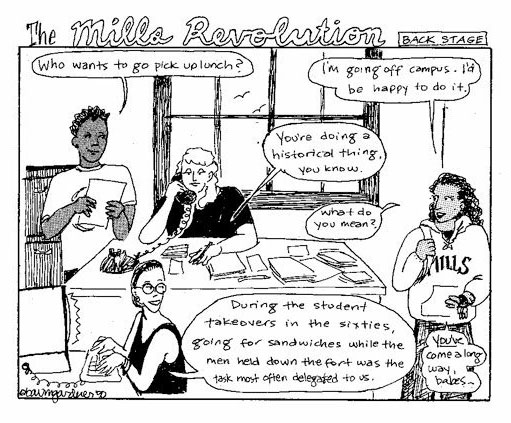 Anna Belle is the former Features Editor for The Campanil. She graduated with a history major and journalism minor in May 2010. Interact with her on twitter @abelle13.

More from FeaturesMore posts in Features »