Beyond the Quake: Mills professor shaken by destruction in Japan, helps students cope with old art 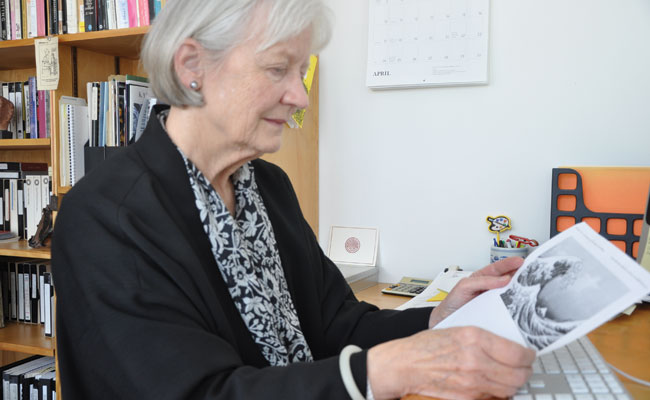 When a 9.0 earthquake and 124-foot tsunami struck Japan on March 11, I, along with the rest of the world, spent the weekend checking for updated photos, articles and videos of the damage. Like many people, I didn’t know anyone living in Japan personally, but it broke my heart to see a country losing thousands of innocent lives and whole towns.

My Asian Art history professor Mary-Ann Milford was the very first one to use her class curriculum to provide us with some hope about the situation. Through a PowerPoint slide, Milford stunned all of us in my Japanese Paintings and Prints class with the very iconic image of “The Great Wave off Kanagawa” by Japanese artist Katsushika Hokusai.

You know the one: a woodblock landscape print made in 19th century that depicts a storm off the Kanagawa, Japan coast. The print shows one huge, blue tidal wave, traced with white foam shaped “like claws,” as Milford described them, reaching hundreds of feet into the air. Fearful of its destructive power, tiny human figures cower on board the three depicted boats, expecting to be thrown off by the strong currents. In the distance, the beautiful, snow-capped dome of Mount Fuji – the tallest mountain and most popular site in Japan – bears witness to the storm.

For me, “The Great Wave” was just that generic stock print found on postcards and novelty mugs in every gift shop in Asian art museums. It’s been used in advertisements and reinterpreted in other artworks so much that the print has become synonymous for Japanese. But in the PowerPoint, the symbolic meaning behind “The Great Wave off Kanagawa” became clearer and all of us felt a little less traumatized by the ongoing disaster.

Senior Alliah Gilman Bey also saw the “The Great Wave” in Milford’s class. She’s the president of the Anime Alliance, a Mills club that features weekly Japanese animation films and holds Japanese pop culture discussions. She found the image to be reassuring, especially for people unfamiliar with the death-defying, indomitable Japanese spirit, or yamato-damashii.

“Japan always had natural disasters. It’s the culture over there to accept nature – how it’s both devastating and beautiful,” Bey said.

Milford has been teaching Asian art history at Mills since 1982. While she didn’t have any contacts there when the earthquake and tsunami hit, Milford felt a special connection to Japan, having done years of research on its rich artistic culture. When I went to interview her last Tuesday, I was drawn to the Amida Butsu – Buddha – statuettes she collected over time adorned in her office.

“On the first day (when the earthquake struck), I was speaking to someone when they asked me if I had heard about it,” Milford said, clutching her hands up to her chin. “I rushed to my computer and it was indescribable what’s happening.”

Milford found a photo in the New York Times depicting dozens of cargo trains piled like toy bricks to be particularly disturbing.

“Trucks with containers always pass me by when I’m driving to work,” Milford said. “They’re enormous, and yet, they can be thrown over so easily.”

Milford’s eyes grew sad as she recalled the Kobe Earthquake in 1995 that measured 6.8 on the magnitude scale. Milford’s daughter was residing in Nara, Japan at that time about 38 miles away from the epicenter.

“She was lying down (when it happened), said it was like being in the middle of an ocean,” Milford said. “After that, she immediately joined Red Cross and worked with the Kobe victims. She was telling me how amazing the people were.”

Milford went on to describe how the Japanese people staying in makeshift shelter homes offered to share their food with her daughter and the volunteers. It was amazing to Milford that the Japanese back then still had a sense of protocol even when they’ve lost everything and she could see the same thing happening in Japan now.

“Even at the end of their lives, they still tried to make a living for themselves,” Milford said. “All of that comes from a reservoir of strength.”

Milford stared at the photocopy of the “Great Wave” I gave her and traced a finger over Mount Fuji. It was then when I realized that, while the tidal wave was monstrously huge in its depiction, the faraway mountain was even bigger.

“(Mount) Fuji is where the kami (a Japanese word for the spirits and natural forces) is believed to be,” Milford said. “Fuji is watching, acknowledging the surge of the current. Man cannot resist. And (the Japanese) accept that.”

Mary-Ann Milford will be teaching the art history class Introduction to Asian Art: India and Himalayas next Fall.

You can read more related posts on The Campanil’s special page about the disaster in Japan.

Published in Disaster in Japan and Features

Melodie Miu is the former Online Editor for The Campanil from Spring 2009 to Spring 2014. She graduated from Mills College in with a BA in English with an emphasis on creative writing and a minor in studio art. View her LinkedIn profile and personal art blog. Interact with her on twitter @mldmiu.