Health Matters: The world of allergies

Sneeze, sniffle and sneeze some more.  We are aware of common allergy symptoms including: runny nose, itching, rashes, swelling, sneezing, watery eyes and congestion. But where do allergies come from and how do we get them?

According to the American Academy of Allergy Asthma & Immunology (AAAAI), an allergy occurs when the body’s immune response goes wrong because of outside substances.  Substances, such as pollen, are called allergens and are harmful to the body. In response to identifying dangerous materials, the body tries to defend itself by creating an inflammatory response, resulting in symptoms such as sneezing and watery eyes, associated with allergies. 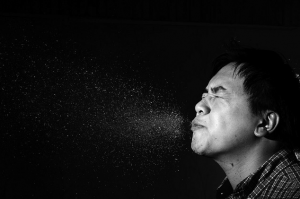 The Joint Task Force on Practice Parameters in Allergy, Asthma and Immunology, composed of representatives from AAAAI and the Joint Council of Allergy, Asthma & Immunology (JCAAI), records the diagnosis and treatment for allergies and estimates that the allergy, allergic rhinitis, also known as hay fever, affects 20 to 40 million people in the United States annually, including 10 to 30 percent of adults and up to 40 percent of children. Allergic rhinitis is a collection of symptoms caused by a nasal allergic reactions to pollen, according to U.S. National Library of Medicine. When a person breathes in, it causes an allergic reaction resulting in swelling, itching and mucus production. Even though it usually develops in children or young adults, it can begin at any age.

AAAAI.org, a website run by the American Academy of Allergy Asthma & Immunology, provides pollen and mold levels at specific areas in the U.S. Weather.com also provides daily pollen counts for locations across the country.

Students often come in during the fall and spring displaying allergy symptoms. However, Thompson said it is hard to say whether they have allergies or not because allergies can often be confused with common colds. Most people don’t even know they are allergic to these substances floating about, according to Thompson.

Distinguishing a seasonal allergy  from a cold can be done quite simply, according to Michael Kaliner, Medical Director of the Institute for Asthma and Allergy. Kaliner identified a few key symptoms to help distinguish symptoms of colds and allergies:

– occurs aroud the same time of the year (early April/ mid May) due to pollen
– can last up to two to four weeks
– Itchiness in the eyes, throat and nose.

Though allergies are often more potent in the spring time, the AAAAI says symptoms can occur unexpectedly all year due to indoor triggers. Indoor allergens — such as dust mites, indoor mold, animal dander, wood dust and chemicals — may also trigger an immune response. This may cause symptoms in not only the nose, but also in the lungs, throat, skin and sinuses.  Cleaning indoor areas by doing things like vacuuming can help reduce potential allergens.

To identify a specific substance causing an allergic reaction, you can see an allergist for testing, diagnosis and treatment.

“They did this skin scratching examination. It was simple, and I was able to figure out what my allergy triggers exactly are,” said Iris Alarcon, a sophomore at Mills who went to her doctor to identify her multiple allergies.

By pinpointing her allergies, her doctor was able to prescribe to her the nasal spray Omnaris. In addition to curing her allergy symptoms, it helps her avoid potential allergens that can cause unwanted symptoms from an allergic reaction.

The American College of Allergy, Asthma & Immunology (ACAAI) recommends a person sees an allergist when:

Treatments prescribed by a doctor may vary according to allergy symptoms. However, according to National Center for Biotechnology  Information, common treatments include:

– nasal corticosteroid sprays prescribed by doctor
– nasal spray decongestants to educe nasal congestion
– allergy shots, which includes regular increasing doses from injections of the allergen to help the body adjust to it

For information for treatment of allergy symptoms, visit the Kaiser Health Center at Mills.

Health Matters is a column written by the second-year nursing students participating in the Nursing Leadership Class.