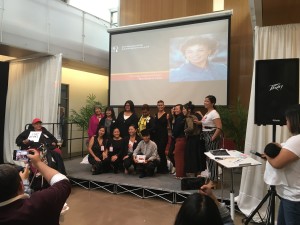 On Nov. 3, the first ever AAPI Women Lead and #ImReady Movement Conference was held at the Ed Roberts Campus in Berkeley, California.

Organized by Connie and Jennie Wun, two Vietnamese-American sisters who founded the AAPI women-lead organization, this event brought together Asian American and Pacific Islander activists, leaders, and self-identified women and highlighted how they’re changing the world in their respective fields.

“We know the #ImReady didn’t start with us and we are standing on the shoulders of those who came before us,” conference moderator Connie Wun said, acknowledging the work of activists who paved the way for today.

Starting at 9 a.m. and running until 7 p.m., the day included four panel discussions, three individual story highlights, an activity, a performance and the welcoming and closing keynotes. The panels explored “Contextualizing AAPI Experience in the U.S.,” “Health, Healing, and Wellness,” “Violence, Resistance, and Activism,” and “Business, Leadership & Civic Participation.”

Almost all of the day’s events were held in the Ed Roberts main opening area on the first floor. Other spaces included an AAPI wellness center located on the second floor, vendors in the lobby and acupuncture available by appointment.

Additionally, the conference focused on racial and gender based discrimination and harassment. Two speakers shared their stories of sexual assault and harassment for the very first time, and many more speakers referenced their own experiences throughout the day.

Featuring 27 speakers and an appearance by Congresswoman Barbara Lee, the day was packed from beginning to end.

From the starting panel, it became clear that there was a theme: many of the speakers expressed surprise, trepidation or discomfort when they shared their stories of being invited to the conference. Some had never considered themselves a “leader,” while others thought they did not fit the traditional image of a leader and identified more with other words. Most said that they had been unsure whether they even fit the role, and some told the audience that Connie Wun had encouraged them to claim that space.

“I want to challenge that internalization of the idea that we’re not leaders,” Robyn Rodriguez said after the first panel described their hesitations around identifying with the word. “We have to reclaim leadership. It’s a role, not an individual achievement.”

Other themes emerged throughout the day, such as an emphasis on telling your story, which started a discussion about how telling your story is not enough to make change because people must listen to our stories too. Other themes included finding the strength and the struggles of each woman, the dichotomy of the “model minority” and being “forever foreign,” and how the AAPI communities can be allies within and outside of the broad AAPI designation.

Connie Wun presented the welcoming address and introduced the morning keynote speaker, Surina Khan. Khan, CEO of the Women’s Foundation of California, discussed her journey in becoming the CEO she is today, from looking to her mother as a role model to reconciling her increasingly liberal and progressive views with her parent’s more conservative values.

The first panel of the day, “Contextualizing AAPI Experience in the U.S.,” featured Connie Wun as mediator, Dr. QiYan Poon, Sung Yeon Choimorrow, Robyn Rodriguez, and Mills’ own ethnic studies professor Dr. Natalee Kēhaulani Bauer. They discussed how groups within the Asian American designation relate to and address differences in relation to each other, blackness and whiteness.

“Asians in Hawaii need to look at their privilege,” Bauer said. “History is not actually in the past … ‘Settler colonialism is a structure, not an event,’ to quote Patrick Wolf.”

The second panel, “Health, Healing, and Wellness,” discussed methods of healing within different AAPI communities. Adelina Tancioco, Hamida Yusufzai, and Melissa Luke were the speakers while Dr. Jeannie Celestial was the moderator.

In between the second and third panels, two individuals contributed their stories. First, Nora Haron, executive chef and partner at 4P’s Hospitality Group and a Culinary Consultant, shared her story. During the break for lunch, Congresswoman Barbara Lee made an appearance. She was an inspiration to one attendee, who said Lee was her hero.

“I wanted to talk about Barbara Lee. She is my heroine. She is the only person who voted against the Iraq War,” the attendee said.

Following lunch, Bi Nguyen, the second individual to share her story, spoke. Nguyen is one of the first professional Vietnamese-American female fighters and a world contender. She spoke about fighting discrimination against female athletes and domestic violence.

After the third panel, the last individual story highlight presented Cheryl Sew Hoy, an investor and the person behind #MovingForward, which is an open-source database focused on anti-discrimination and anti-harassment policies that venture capitalist firms can commit to.

The last person of the day, renowned Samoan slam poet Terisa Siagatonu, performed a few pieces that echoed around the room. To close out the night, the organizers provided food and drinks for the concluding mixer.

After a long day of speakers baring their lives and stories and audience members responding with tears, shared stories, and consideration of the many deep topics discussed on stage, the conference left some with a sense of context and a lot of food for thought.

Attendee and Mills student Sam Barnett had many thoughts around the conference designation and discussions around how different groups within the ‘AAPI’ category relate to each other. As a native Chamorro, she said that there was a lot she took away from the conference.

“Honestly, I think I was carrying that sense of confusion and trying to think more about the API label and how we can challenge it,” Barnett said. “For me personally and for where I’m at with my work with decolonization with the Pacific Islands, the API category is not useful for me and I don’t think it has political power in the way we want to reimagine our communities, especially from a decolonial perspective.”

Although the categorization didn’t resonate with her, Barnett found that overall the conference provided a space that was needed.

“Overall I think the conference was a really valuable space and I think it was obvious from the organizers that a lot of love and powerful intentions had gone into it. I really was grateful that it was something that happened and I think that we need more spaces like that just in general,” Barnett said. “I do think it was great and that it needed to happen and needs to happen again.”