Behind the Front Lines: Faculty Perspective on the Mills Strike 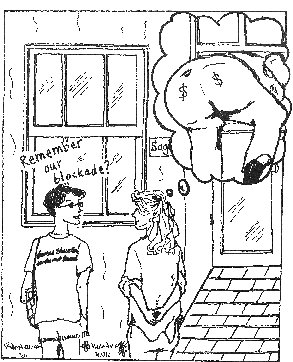 It was late in the afternoon. The sun was shining bright like it had been for the last 10 days. Students wearing yellow ribbons around their arms and in their hair lined each edge of the bridge. As faculty walked past them for their meeting in Stern 100, student protesters handed yellow roses to every person who would take one.

This is what history professor Marianne Sheldon remembers of the day the faculty symbolically voted on whether or not to turn the College into a coeducational institution.

“It was clear that the students wanted to be an all women’s college. They were very passionate. Their heart was not in coeducation,” Sheldon said.

Even though the faculty met to cast their vote on whether or not Mills should remain all women at the undergraduate level, professors knew the decision was not really theirs to make. It was the Board of Trustees’ decision to admit men that led to the strike and it was the Trustees’ job to resolve the problem.

The spring of 1990 was one of the most historic times for the College. Indeed, the student body of “Strong Women, Proud Women, All Women, Mills Women” was passionate about proving to the world that it was. When the board announced its decision to go coed, students immediately leapt into action.

Nancy Thornborrow, Economics Professor and outgoing Dean of the Lokey Graduate School of Business, was involved with the 16-day protest from the very first rally. She said she vividly remembers the Board’s announcement that Mills would begin admitting men into undergraduate programs to stave off budget problems.

It was in May, right before the end of the academic year. The Trustees came out, rang the bell and everybody gathered on Toyon Meadow. After Chair of the Board Warren Hellman made the announcement, President of ASMC Robyn Fisher jumped on stage, took the microphone and said the students were not going to take it.

“The students heard the decision, but [they] didn’t believe that it was really made. They thought that reversal was an option, and, clearly, they were right,” Sheldon said.

Later that evening, students organized a large rally and the Strike officially began. Hundreds of people gathered at the oval. Some faculty members got up one by one and announced that they understood their concerns, valued their activism and would not punish those who did not come to class or take the final. For those who chose to not to come to class, most professors, though not all, calculated students’ grades at the time of the Strike.

As part of the Strike students shut down the campus. They barred the doors of buildings so administrators could not get into their offices. They camped out in tents. They urged each other not to go to class, instead crafting signs, planning courses of action, making phone calls and talking to the media.

Just as each student and staff member had a different Strike experience, so too did the faculty.

History Professor Bert Gordon was in Madrid, Spain on sabbatical the year of the strike.

“I first heard about the Strike from the Israeli ambassador to Spain. By the time I heard, the College had already decided to stay an all women’s school,” Gordon said.

Gordon said he did not notice any real changes at Mills until a few weeks after he returned home and began teaching classes that fall.

“After being back for a few weeks, I noticed that there was a heightened awareness that Mills was an all-women’s college. People did not ignore this before; it just was not as strong,” Gordon said.

Professors who were at Mills during the Strike remember noticing the same thing.

Thornborrow said, “Everyone talked more about being a women’s college. It was energizing to win. A lot of students felt that they had saved the school.”

Sheldon said she noticed that energy as well.

“There was a huge sense of energy and a renewed commitment to women’s education,” she said. Everyone had a “strong sense of purpose [and] focus. People kept asking what they could do to make it work.”

Even with the changes that occurred after the Strike, including the faculty volunteering to teach six courses over the year instead of five for the same pay, most agreed they were happy the Board rescinded its decision to go coed.

“I was absolutely happy with the decision. If I had a chance to vote, I would have voted to keep [the school] all women,” Gordon said.

Other changes following the Strike included the addition of mandatory first-year seminars, which were team-taught by members of the faculty. The seminars were added to increase retention and to attract more students to the College. The classes sought to show students “no one field had the market cornered,” Sheldon said.

Overall, most professors would not change anything that happened during or after the Strike. They may not have been the ones sleeping on the ground each night until the Board said, “Mills, for women again,” but they, along with the staff, were integral in encouraging the student body.

Even though the faculty helped, Thornborrow said the majority of the credit should be given to students.

“The students did it. The faculty helped, but the students were the ones who did it.”

Alixandra is the former Assistant News Editor for The Campanil. She was a sociology major and journalism minor. Interact with her on twitter @alliegreenman.

More from FeaturesMore posts in Features »