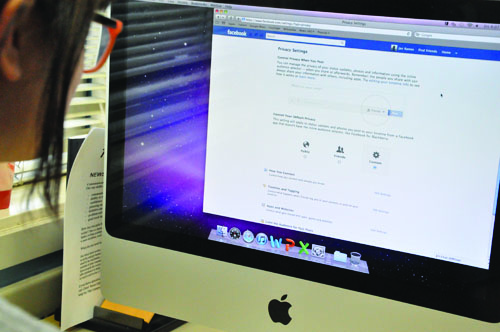 Seventy-five percent of American recruiters and human resource professionals say their companies require them to do online research about potential employees. The New York Times reported that in 2009, 70 percent of employers chose not to hire job candidates based on incriminating information online. (Photo Illustration by Bridget Stagnitto)

As Mills College seniors and second-year graduate students prepare to enter the grueling job market, they may want to consider their online habits. Turns out job recruiters and employers not only run background checks, they also take a look at Facebook and Twitter for information on their potential hires.

Career advisors, including Christina Hernandez, Networking and Opportunities Coordinator at Mills Career Services, also recommend those on the job hunt run a Google search of themselves to see what prospective employers might see.

“You need to know what’s out there about you,” Hernandez said. “Employers are looking at this stuff. Even after you’re hired, they’re still looking.”

Everyday, we willfully give away personal information without realizing it. Advertisers gather information about individuals each time they log into a site or interact with it when logged into a social media profile, according to The Atlantic article “I’m Being Followed: How Google—and 104 Other Companies—Are Tracking Me on the Web.”  Companies use this information to tailor the ads a person sees to ones they are most likely to click, and store the information for later use.

Even the Library of Congress is taking an interest in social media content, having recently announced that it will permanently store the archive of public Twitter posts since 2006.

While some former and current Mills students expressed concern about being searched on the Internet by potential employers, Mills alumna Amanda Jeanette sees it as simply a sign of the times.

“I don’t think that there is a way of stopping a hiring manager or recruiter from trying to find information about you on the Internet,” she wrote to the Campanil on Facebook. “You are better off working around the assumption that they will. Work with the change in hiring culture and get a Linkedin account.”

“I don’t see employers Googling you as a privacy violation in and of itself,” she wrote on Facebook. “I see it as problematic, especially since people are on the Internet younger and younger, doing things that could possibly incriminate them.”

Facebook recently released a document detailing their demographics, which reports that 18 percent of U.S. Facebook users are between the ages of 13 and 19, and 34 percent are between 20 and 29 – ages where getting a job or attending college is becoming a reality.

And job recruiters are not the only ones looking. According to a study from the University of Massachusetts Dartmouth Center for Marketing Research, 95 percent of college admissions offices check a student’s social networking sites in the admissions process. Mills, though, has not jumped on the bandwagon.

“Occasionally a student will friend us on Facebook and we will see something inappropriate,” said Joan Jaffe, assistant dean of admission. “But we do not seek them out.”

Such inappropriate content includes bad language in wall posts and pictures cataloging unbecoming behavior, but nothing serious enough for the admissions department to step in.

“It’s nothing we want to hold against students,” Jaffe said, “but they should really be more careful.”

Especially since these days much of the content on the web is there permanently, even if users think they’ve deleted it.

Pictures are of particular concern when trying to remove content from the internet. A 2009 Cambridge University study tested 16 photo sharing sites to see if an image remained online after it was deleted and found that seven of those sites, including Facebook, did not pass the test.

Photos remain online after deletion because sites like Facebook store their main content on one server and things like photos on a range of others. This makes it difficult to know exactly where information is at a given moment, and makes it easy for future employers to find that compromising spring break picture you thought you deleted.

Sophomore Emily Dixon said she also saw internet background checks as a sign of the times, but wasn’t pleased with it.

“I believe that social media should stay social for a person’s private use, and not be used as an excuse to deny someone a job,” she said. “Background check? Fine. Facebook check? Not so much.”

But regardless of opinions on the matter, Internet background checks don’t seem to be going away. In fact, more and more companies that do the dirt digging for recruiters and schools are popping up on the web. Social Intelligence Corporation is one such company.

“Social Intelligence provides powerful tools to employers to mitigate workplace risks,” the organization’s website said, “and to many other organizations to benefit from the valuable information that can be attained through social media research.”

Social Intelligence touts its ability to effectively provide an organized list of an individual’s social media tidbits “while reducing the legal exposure of conducting social media searches internally.” This means Social Intelligence will gather subjects’ information discreetly, and hand it over to the potential employer. Not only that, but once they find compromising information, they will store it for seven years even if it has been deleted. However, while this information is stored, it is not reused each time a new employer runs an internet background check.

“We store the information to maintain a verifiable chain-of-custody in case the information is ever needed for legal reasons,” Geoffrey Andrews, COO of Social Intelligence, told Forbes in 2011. “We are not however building a ‘database’ on individuals that will be evaluated each time they apply for a job and potentially could be used adversely even if they have cleaned up their profiles.”

Other companies like this include Sterling Social Media, Social Media Intel and Radian6, which have programs aimed specifically at secondary education institutions.

While many argue that these social media background checks are an invasion of privacy, the problems surrounding the searches can be largely avoided.

Though it would take 76 workdays, according to Atlantic Monthly, for the average American to read each and every privacy policy agreement in a year, this is a good place to start.

Knowing what information you are willfully giving away when you create an online profile is key to maintaining privacy. And once you agree to a policy, set your privacy settings high.

Facebook’s standard privacy settings are fairly low, allowing most people to see the content on your profile without adding you as a friend first, but the settings are easily customizable. When changing the privacy settings, there are three options: public, friends and custom. Click through all the categories of privacy that Facebook provides you within each of these settings. If any of them leave you feeling out of control of the content appearing on your page, customize.

It is also possible to customize who sees photos and statuses as they are posted to Facebook. If someone friended their boss but are dying to tell all their friends how bored they are at work, they can eliminate him or her from the list of people who get to see the post. But it’s still probably not a good idea.

“My rule is that nothing goes on the Internet that I wouldn’t want my mom and/or a client to see,” alumna Elizabeth Clayton wrote on Facebook. “Journals are for privacy. The Internet is not, and never has been.”

But some people need a little help when it comes to knowing what is appropriate for an online post. For those people, there are applications and other technologies being created to provide friendly nudges in the right direction.

Internet Shame Insurance is a simple application that gives you simple reminders each time you post to Facebook, Twitter or hit “Reply All” on your Gmail account. For instance, when you press share on Facebook, an information bubble will pop up that reads, “Everyone can read this. This means your grandma, your priest, and your thought-controlling government.”

Acquisti is a similar application. Gmail, too, has created a feature called Mail Goggles, which prompts you to solve a simple math problem before sending a message to protect you from sending a drunken email you may later regret.

Other technologies include a human-looking character that lingers beside your cursor and shoots you stern looks before you hit the send or post button.

According to a study by M. Ryan Calo of the consumer-privacy project at Stanford Law School, studies have shown that Internet users in the presence of this human-like character are less likely to disclose personal information than those without the character.

But the most important protective measure you can take is to think twice before posting inappropriate or compromising content to your social media profile. And remember that your grandmother, priest and government can see this.

Published in Headline Story and News

Tessa Love is the former Editor in Chief of The Campanil from March 2013 until May 2014. Love graduated with a bachelor in English with an emphasis in creative writing and a journalism minor. Tweet at her @tessamlove.