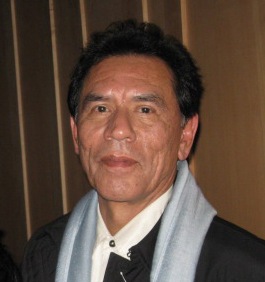 “A Life of Activism and Art: A Conversation with Wes Studi” took place at Lisser Hall on Jan. 30.

Studi, a beloved Cherokee actor who has been in over 80 films, sat down with Dr. Natalee Kēhaulani Bauer, assistant professor in ethnic studies and women, gender, and sexuality studies and director of Mills’ Native Student Recruitment and Retention Initiative.

The hour-long conversation between Studi and Bauer held laughter, introspection, and appreciation for Studi’s illuminous career and his experiences throughout.

President Beth Hillman began the event by acknowledging the space of Lisser Hall and that it occupies Ohlone land.

She then introduced Mills alum Alexa Pagonas, who has represented Studi for over 12 years as a professional talent manager. Pagonas in turn spoke about Studi’s life and showed a film clip that detailed the myriad roles Studi has played in his career.

She talked about his dedication to social justice, such as his involvement in starting the American Indian Movement in the late sixties and being arrested at Pine Ridge during the occupation of Wounded Knee in South Dakota in 1973. She described what it’s like to represent Wes.

“One of my favorite aspects is that every now and then the phone will ring and it’ll be some fantastic person in the business, someone like James Cameron or Christian Bale,” she said. “And they’ll call and start telling me how great Wes is as an actor and my job at that point is just to listen and agree with them. That’s a fun job to have.”

During the lively discussion with Bauer, Studi recalled his early childhood, acknowledging his faint memory of learning English in a boarding school in Oklahoma at the age of five after speaking Cherokee up until then. Boarding schools have historically attempted to eradicate Native cultures through the process of systemic assimilation. However, he had to relearn Cherokee at his grandmother’s behest, and since then has considered himself bilingual.

“I think it’s been very helpful in my business to be able to play with other languages when people have no idea what you’re saying,” he said.

He also talked about his participation in creating Na’vi, the language spoken by his character in the 2009 film “Avatar.” His gift for language helped him work with linguists in order to create Na’vi.

His gift for language also extends to his experience as an author. He wrote two children’s books, “The Adventures of Billy Bean” and “The Further Adventures of Billy Bean,” for the Cherokee Bilingual/Cross Cultural Education Center in Oklahoma. The stories were originally released in the center’s periodical, a recurring column, he collaborated with, and the stories used both Cherokee syllabary and English for elementary school students in Cherokee County.

Several questions were asked by both Bauer and the audience via question cards about his history in film, including the 2017 film “Hostiles.” Bauer expressed her appreciation for his role, wherein he portrays a dying Cheyenne war chief being escorted to his home in Montana with his family. Studi mentioned the challenges of the role, saying that he had never played anyone who was slowly dying, but he said he wants to try anything he hasn’t done before.

When asked if he felt he had control over his Native identity in films, he emphasized that to be an actor, one’s identity has to disappear in order to play a role and a create a convincing performance.

Studi talked about his origins of activism. He completed a year in the army in Vietnam until about 1969 and returned to go to college on the GI bill. A lot of community organizing started occurring, and through college recruitment he became involved with the Trail of Broken Treaties, a 1972 cross-country protest culminating into a march on Washington D.C. to bring more public and federal awareness to Indigenous rights.

When asked about how the activism from the late twentieth century built into the activism we see today, he responded, “I think the big idea is that we have begun to come together. As Indigenous people, we understand that we’ve all been through this process of colonization. Standing Rock showed us how Indigenous people from different parts of the world showed up for that. A solidarity of Indigenous people.”

Standing Rock, also known as the widespread protests against the Dakota Access Pipeline (also known as #NODAPL) that began in 2016, fought against the construction of the pipeline that would affect the water source and sacred ground near the Standing Rock Sioux Reservation.

The public attention of Standing Rock was a key point of current progress for publicizing Indigenous rights. Studi mentioned not truly understanding Indigenous sovereignty until the sixties, when collective organization began happening, including the formation of the American Indian Movement, and he mentioned the importance of the beginnings of widespread Indigenous organizing during that time.

Dr. Bauer added, “I think that acknowledging Indigenous people across the continents is a step in helping others understand the arbitrary nature of these borders that we build and imagine to be.”

Studi succinctly summarized the importance of activism, reflecting the conversation with Dr. Bauer as a whole.

“I’m grateful that there are activist people in the world,” he said. “I think we all need people who stand up and speak to power.”