Can we live here? Stories from a difficult world 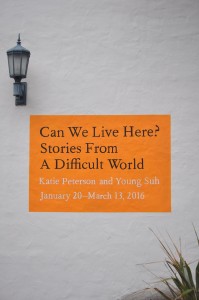 The words “Art Gallery” usually connote an image of classy people drinking red wine and looking at oil paintings. However, at the opening reception of the Mills College Art Museum’s new show, the atmosphere was anything but sophisticated, due to the intentionally chaotic nature of the performances.

Amidst the photography, a variety of forms of art including video, installation, performance and sound filled the crowded museum. The show displays the art of two people, photographer Young Suh and poet Katie Peterson, whose art examines how humans and nature rely on, and support, each other.

The opening included chaotic performances occurring continuously throughout the evening, such as one where performers wearing donkey masks interacted with visitors.

One of the masked performers described the scene as being filled with riotous energy. This could be referencing the movements of the performers in the space, or the audience’s anticipation at being involved in the scene. The performance included both children and adult performers. The many performers interacted with the gallery visitors through boisterous body language and insulting comments in order to create interventions and bring playfulness and surprise to the serious gallery environment.

Despite the activity of the performance, the works are serious. One large installation, Concealed Carry (for Emily), consists of many desks, arranged as if in a classroom, with books on top. These are meant to be sat at and read by gallery visitors. However, the desks contain objects, such as plaster guns, which the visitors are asked not to touch.

“The interplay between the objects, books and viewers conjures much thought,” gallery worker Connie Lee said.

Some props scattered throughout the show, are meant to raise questions of nature as a sanctuary, or as a hostile environment. Many of the photographs are very serene, but some objects, such as guns, are less so.

“The sudden shifts between moods in art mediums is much more engaging than a traditional show,” said MFA student Jing Wei Qiu. “The out of place element makes you think about the art.”

The show will be running until March 13.