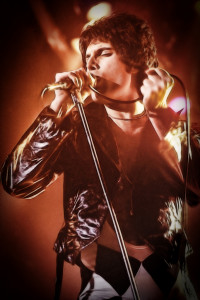 The music world was given another contribution to the heaps of yearly biopics with “Bohemian Rhapsody.”

The film chronicles the rise of legendary British rock band Queen from the moment Mercury meets bandmates Brian May and Roger Taylor, through the ups and downs of stardom, and until Mercury’s death from AIDS. Although not entirely historically accurate, May and Taylor were involved in the nearly ten year development of the movie. In a recent interview with Flicks and the City Clips May explained his and Taylor’s initial reluctance with the project.

“It’s difficult to make a film that would do Freddie justice,” May said. “What happened over the years was we realized that if we didn’t get involved, then somebody else would do it and we wouldn’t be able to protect Freddie’s legacy.”

With this being said, it is hard for me to truly understand this film and what it represents. If May and Taylor set out to protect the famously private singer’s personal life, in particular his bisexuality and eventual diagnosis of HIV, it is understandable that not everything would be explicitly depicted.

However, what is shown of Mercury’s personal life is flawed and seemingly done with triviality.  The movie quickly gets to the point when he is engaged to a woman (who practically erases his bisexuality when he ends up telling her) but is shown looking longingly towards men while Queen is on tour. The directing makes Malek engage in borderline creepy and non-consensual acts with men without showing much intimacy within his relationships, and has a frustratingly black-and-white approach of showing Mercury’s evolution of sexuality.

For being a film largely about a queer performer, the writing and directing seems to exert overtones of heteronormativity while simultaneously portraying either exoticized, negative or bland elements to Mercury’s experiences and relationships with men. Even though there was very little characterization amongst the board the scenes of Mercury exploring his sexuality lack intimacy and authenticity.

For having such a big platform to respectfully depict Mercury’s sexuality, it frustrates me that there was such a minimal emphasis. It was a huge deal to be gay, let alone bisexual, in the UK given that homosexuality was decriminalized in 1967, which is about a decade before Mercury’s coming out in the movie timeline —which may be why Mercury evaded questions focused on his sexuality and never publicly labeled his sexual orientation.

Personally, it felt like the movie I saw had large areas of censorship in order to ease a widely heteronormative global audience into the complexity of human sexuality. The few scenes of intimacy with Mercury’s partner until Mercury’s death in 1991 come off contrived; the screen time for this serious relationship is limited at the expense of an almost direct recreation of Queen’s iconic performance at the 1985 Live Aid concert with only a mere end credit mention about Mercury’s death.

One of the more compelling parts of the movie is Malek’s speech to his band mates when he tells them he has AIDS. He explains that he doesn’t want to be the face of AIDS, to become a poster boy for a disease that has many faces and permutations. Sadly, the opportunity for a nuanced spotlight onto the progression of his disease is wasted in favor of one cut-and-dry clinic scene that quickly loses the intensity of an HIV-positive diagnosis in the late eighties. In the movie he is diagnosed before Live Aid (even though he found out after the concert), undoubtedly to create tension within the latter half of the film.

One could argue that more screen time for the band as a whole was needed, but let’s be honest—when the creation of the song that titled the movie is shown as, “Hey! Listen to this riff. Oh wow, the vocal layering came together within a minute! Now we’ve got this colossal super hit, let’s move onto the next scene,” we get the feeling that this is more of a Mercury-driven movie.

And, unfortunately, save for Malek’s chameleonic performance, the intricacies of both Freddie Mercury’s life and the trajectory of Queen’s rise to fame within an important socio-historical time is severely muted for a generic, glossy music biopic that is sure to garner revenue at the box office (and already has).