Bitter Brown Femmes may not be so bitter, but still critical 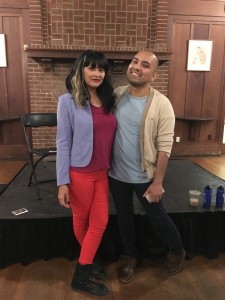 On Thursday Oct. 25, the hosts of the podcast Bitter Brown Femmes brought critical thinking and hope to their talk, both laughter and quiet gravity spilling from the open Student Union doors in turns.

Ruben Angel (well-known on Instagram as ‘QueerXiChisme’) and Cassandra Alicia (whose Instagram handle is ‘Xicanisma’) discuss political, social and personal community issues on their podcast, Bitter Brown Femmes, which they started together two years ago.

Originally intending to record an episode with the live Mills audience and then hold a following Q&A, the hosts held true to the intended structure after mic feedback made recording difficult. For the first hour they discussed many topics from what is in the news to how astrology appears in parts of their lives; next they answered any questions.

This was only Angel and Alicia’s third time meeting in person. Alicia said they first met when they were invited separately to speak on a panel in Portland, Oregon in May 2017. At the time, Alicia had just started a podcast herself, but after recording one episode with Angel as a guest, they decided to create their own podcast together.

According to their website, the podcast “was born of a necessity to take the Latinx/Chicanx community dialogue beyond mere identity empowerment and feel good/comedic fluff (that, although they have their place, oversaturate social media) and into a realm that is critical of identity and society while advocating for marginalized peoples.”

Seniors Katie Funes and Andrea Ortiz-Galdamez organized the event with the support of ASMC special funding and the Ethnic Studies department. They knew that a lot of Mills students followed Angel and Alicia through social media. Funes said the biggest hesitation she had for holding the event was being unsure how many students would attend. However, students did not disappoint, as many of the seats in the Student Union filled up.

“I was really invested in making this event happen at Mills because we don’t see a lot of events like this, especially when they’re student-initiated. They talked about a lot of different and complicated things, but discussed them in a way that was accessible and interesting for the audience,” Funes wrote in an email. “Shout out to everyone who came out and supported this event, really grateful to see community come together.”

Mills has a large student commuter population, so getting to an on campus event can be hard. Funes was glad to see outside community members show up.

“There were so many students who came and I was also really happy to see folks from outside of Mills who came to join,” Funes said. “It was really important to me that this event was open to our outside community and seeing people who weren’t Mills students attend made me really happy.”

Senior Socorro Montaño’s favorite part of the event was how the hosts joked lovingly with each other and liked being able to put a person to the voices they listen to on the podcast.

“The Bitter Brown Femmes event was so beautiful to be at, because not only is it these beautiful people that I admire on stage, it’s also because it was organized by people I love and I’m deeply appreciative of that,” Montaño said. “But more than anything it was really cool because there are these voices that I’ve only heard in my earbuds or from my phone and then it’s coming from a body.”

One of the first things the pair talked about was what the Trump administration is proposing as the federal government’s definition of gender—as tied to and inseparable from sex assigned at birth.

“The thing I’ve spent all weekend making noise about is Trump’s trans memo, which is such a reductive way to describe it,” Angel said. “This is not only a state sanctioned attack, it is a mental terrorism.”

Alicia agreed, bringing up the point that the time to support trans people of color is now, when they are alive.

“You’re in this state of hopelessness,” Alicia said. “What does it mean to be a cis-woman when trans people are under attack, and something Ruben talks about is while showing up for trans people while they are alive.”

Angel, who uses he and they/them pronouns, explained that they see fundraising campaigns for a trans person’s funeral, and reminded the audience to support trans people who are alive now as well.

“It sucks that we have to live in this monetary system,” Angel said. “Unless you’re down to fuck up the system then what can you do to support people right now?”

Angel mentioned that it’s important to make sure that people even survive to have the hope for a different future and life in this political climate.

“I know what it’s like to have no time for hope,” Angel said, referencing a time when they were working, almost homeless and struggling to pay bills. “There’s only time to cope.”

One of the issues that came up was how racial or ethnic diversity on the ballot does not equal or guarantee representation. Alicia outlined Beto O’Rourke’s platform, a candidate from her hometown of El Paso, Texas and laid out his conflicts of interest and ulterior motives for some of his decisions on developing areas of El Paso.

“Ideologies and ideas over identities,” Alicia said. “If a white man was about it, then I’d vote for him.”

Alicia mentioned O’Rourke’s conflicts of interests and past decisions in developing parts of El Paso. O’Rourke’s father-in-law is a multimillionaire real estate investor. The New York Times wrote that even “as Mr. O’Rourke’s national popularity grows—there is even speculation that he may run for president in two years—his involvement in the proposed El Paso redevelopment highlights a side of his record that, on its surface, seems to contradict the populist image he has cultivated in Texas and nationally.”

This contradiction of a person’s identity versus how they use their power is something Alicia felt strongly about.

“Yes, we want more POC in politics, but not if their politics are shit,” Alicia said.

Angel agreed, saying that the liberal machine is teaching that representation is liberation when that’s not the case.

“A settler state isn’t going to see us as humans, we are just a voting body,” Angel said.

When the two were not talking about politics at the national and local level, they examined social structures and identity, covering white feminism, how complicated it can be identifying as ‘Xicano,’ detention centers, white women, parenting and child autonomy and white supremacy.

“Racists—their passion is their hate,” Alicia said. “They’ll show up to vote.”

Together, Alicia and Angel encouraged the audience to vote, at the same time acknowledging that voting only goes so far.

Woven between the discussion of serious politics and ingrained social structures, speaking about resistance uplifted and balanced the conversation.

Both hosts circled around again and again to the idea of ‘the community’ and how healing finding those people and those places can be. Whether that looks like fighting together against the development in El Paso, as Alicia has been involved in, or building a strong group of friends, the two emphasized the roles that groups of people can play in caring for the self.

At one point, Alicia said that she doesn’t care enough about the white people on her social media or trolling to spend the energy.

“Sometimes you gotta fight the whites,” Alicia said, “but not individually.”

Angel chimes in, saying that they don’t care about white people, they are caring for their people.

“Instead of fighting the oppressor, when do we care for the oppressed?” Angel asked.

In response to a question, when it comes to dating and finding love, Angel recommends finding your community. The first time they were kicked out of their home, cis Latinas helped them, the second time QTPOC helped them.

“If it wasn’t for them, I would have been a statistic—I already was a statistic, one of the 40 percent of LGBTQ youth who are homeless,” Angel said. “Find your home.”

Building off of Angel’s point, Alicia spoke on internalized bi-phobia and struggling to not feel guilty for cutting off homophobic relatives. If you have to hide your sexuality or anything about yourself that you feel is wrong, Alicia had two words: “you don’t.”

When asked where the bright side is in all of the news, Alicia and Angel centered it back to communities.

“It’s easy to be a nihilist, but if we are paying attention, the people in our communities are fighting,” Angel said, “and when you feel like ‘liberation is not going to happen’ I think, ‘it’s happening around us.’”