A day in the life of a rower 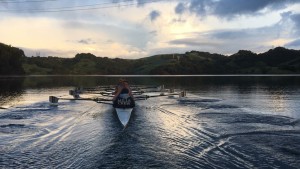 Athletes account for a sizeable portion of the population at Mills College. Everyone has sat next to a student athlete in class or at Founders, but those who do not play sports may not understand the intensity and dedication their life requires. Their lives require extensive planning, hard work and attention to health and time.

For Kayd Miller, a senior on the rowing team who uses they/them pronouns, the day begins around 5 a.m. Rowing (also referred to as “crew”) practice happens six days a week. On Saturdays, there are two practices, and some occur “on land,” as Miller put it—meaning the team stays inside and works out by running and using an “erg” (short for ergometer, which is an indoor rowing machine) instead of practicing on the water. On most days, on the water practice occurs between 5:30 and 8:30 a.m. at Briones Reservoir, which is about 15 miles north of Mills. The team makes it back to Mills just in time to eat breakfast together at Founders.

“We do everything together,” Miller said of the close-knit team, and added that the teammates are all friends.

Teammates, they said, must trust and know each other on a different level than most people.

“It is one of the most synchronized sports,” they explained, as the sport involves four to eight people per boat performing the same actions.

Besides the long hours spent together during practice, mealtime is an important part of team bonding. Meals at Founders, however, can be difficult for athletes who are trying to follow certain diets to achieve maximum amounts of strength and energy for their sports. Miller explained that it is not possible to be an athlete on a vegan diet because of the restrictions at Founders.

Athletes must eat more calories than most people, and need a lot of protein. Following a vegan diet high in protein is not ideal in a place where, as Miller said “a different kind of pasta is offered every day.” The alternative is often meat. Miller also remarked that because of the high amount of calories required for an athlete’s diet, buying food could be expensive for someone not on a meal plan, which offers food served buffet-style. All of the members of the rowing team live on-campus, and many have a meal plan.

After breakfast, Miller takes their daily power nap something they recommend for student athletes. They go as far as to schedule their naps, as the rest is so important to their staying alert and productive.

“You can’t survive without them,” Miller stressed. They explained their napping method: they drink a cup of coffee and fall asleep in the time before the effects of the caffeine kick in—usually 20 to 30 minutes. According to an article on napping by the Mayo Clinic, the ideal nap is 10 to 30 minutes. The clinic also wrote that napping can lead to “improved performance, including quicker reaction time and better memory.”

Besides napping, bedtime is another aspect of athletes’ lives that must be planned to accommodate practices. According to Miller, a bedtime of 9:00 or 10:00 p.m. is ideal for someone on the rowing team.

“It becomes a habit,” Miller said of the early bedtime, “you get used to it.”

Their strict sleep schedule means that studying and homework must be done earlier. Academics, Miller said, are the top priority of student athletes, who are often model students.

Miller was an athlete in high school because they wanted to become stronger, but had to stop when they injured their knee. Rowing was a perfect sport for Miller, as it is the only sport at Mills that is low impact—athletes’ feet stay in one position in the sport, so Miller’s knee injury does not hold them back. Their desire is still to be strong, one of the many things that has motivated them to continue rowing after two years of being on the team.

Miller struggles with chronic depression and said that playing a sport has helped, and improved their mental health overall. This is not surprising, as it has been proven that team sports improve mental health more than any other form of exercise. The Lancet, a psychiatry journal, found that those who participated in team sports had 22.3 percent fewer poor mental health days in a month, in a study done between 2011 and 2015.

“It’s a great first step,” Miller said, “joining a sport is great because it releases endorphins.”

Miller ended by acknowledging the sizeable barriers that still exist within rowing, and within athletics overall. But overall, the experience of being on a sports team is a positive one for many, and Miller recommends it to anyone looking to improve their mental and physical health, and to anyone who wants to become stronger in every way.